It was just after 5 p.m. on a recent Thursday evening and Chris Rhoads, the manager of airport operations at LaGuardia Airport, was engaging in one of his favorite pursuits – talking with high school kids about a future in aviation.

This evening, however, would turn out to be a little different. Rhoads was awarded the William H. Spurgeon Award, the highest recognition for individuals who contribute significant leadership to the Exploring Program, an affiliate of the Boy Scouts of America. The award was presented by LaGuardia’s General Manager Lysa Scully, and Claretta Mills, chief executive of the Explorer Program.

“I was very surprised,” said Rhoads, who has been head of the Port Authority’s Explorer Program for 10 years. “It’s a very good organization and an honor enough to work with these kids – and in some cases have a real influence on their future.”

The program enables high school students to learn about a variety of potential careers first-hand. The Spurgeon award was created in 1971 to honor the driving force behind the program. At LaGuardia, explorers usually meet every third Thursday of the month during the school year. Typically, the majority of participating students come from Aviation High School in Queens, Rhoads’ alma mater.

“Chris’ program tends to always draw the largest crowd, average well over 100 students for the first session in October,” said Scully said. “His commitment to these kids, and sharing his knowledge on aviation, is a treat for both him and the students.”

Rhoads has spent the last 40 years in aviation — first in the airline industry with TWA, and then at the Port Authority for the past 20 years, “I was always close to the parts that fly,” he jokes.

“This program is unique in that it joins the student with the workplace. It’s a visceral experience as opposed to just a learning experience,” he said. “And they are placed with people who are actually in the career and that’s what it’s all about. It’s about getting the students’ horizons expanded to see what’s available to them.”

On the first day of program, Rhoads delivered an airport orientation, with details as to how LaGuardia operates on a daily basis, followed by a tour of the LGA airfield. Students also learn about LGA’s airport snow operations, and were given the opportunity to sit in and explore the snow equipment first-hand.

During the last meeting of 2018, the Explorers visited Building 137 — also known as the police emergency garage — to meet with personnel from ARFF (Aircraft Rescue Firefighting), who explained how the unit works and their importance to maintaining safe operations at the airport. The students also had the chance to sit inside and inspect trucks and support vehicles.

For 2019, the Explorers Program will include visits to the control tower, spending time at Vaughn College (where undergrads learn about aviation), an educational session with the Transportation Security Administration (TSA) team at LaGuardia and a tour of the LaGuardia fuel farm.

Rhoads is optimistic about the future of his Explorers. “My goal is that everyone goes to college. Not everybody can, but that doesn’t mean a good future is not open to them,” he said. “There are many choices that can be made in the aviation industry.” 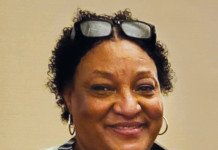