Chuck Eason: The Man. The Myth. The LGA Legend.

If you’ve ever peered out the window of an airplane at LaGuardia Airport (LGA) in New York City to see an aircraft being showered by a water cannon salute or inner-city schoolchildren enjoying a “kids day,” it’s likely you’ve seen the work of Chuck Eason. But it’s what you don’t see that really makes “Chucky,” as he’s affectionately called, a standout among American Airlines’ 120,000 employees.

Some would say Chuck has “institutional knowledge,” but others would just say he is an institution. His 48 years of experience with American comes in handy daily in his role as senior tower planner. “Chucky is the Ramp Control Encyclopedia. All you have to do is ask Chucky. That’s our motto up in the Tower: Ask Chucky,” says Rose Astacio, a manager on duty at Tower Operations.

Chuck’s long-term relationships with the air traffic controllers at the FAA tower have resulted in runway changes that allowed for heavier weight takeoffs, which translates into newly opened seats for passengers who would have otherwise been left at the gate. His close partnerships with Dispatch, pilots and other crewmembers have resulted in last-minute changes that keep the operation moving. “He is all about service. He is all about teamwork and effort for a common goal,” says Flight Attendant Heidi Arby.

Once when all of the printers went out at LGA, Chuck remembered a differently wired computer buried deep within a maintenance area. It worked and Chuck was able to print flight plans, run them out to aircraft and, as a result, 15 different originating flights took off on time. “We deal with all the different departments, and we really have a great chance to smooth out the company’s operation,” Chuck says. “When we get a flight going or we save a big delay, I do get a good feeling.” For Chuck, it’s always about the team. “My Ramp Control Tower, we always keep going. We never get discouraged. My coworkers, I’m very proud of them,” he says.

“Many people have been affected by Chuck’s efforts and aren’t aware of it because Chuck does what he does to help others, not for recognition,” says Captain Chris Redden. But that doesn’t mean Chuck’s efforts have gone unnoticed. 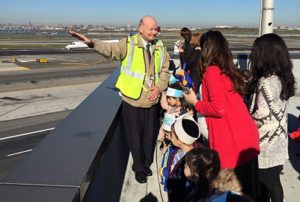 “Annual Chairman’s Award winners are customer- and team-member minded, strategic thinkers, capable of Herculean efforts,” says American’s Chairman and CEO Doug Parker. “Their dedication to American’s customers, operation and to each other is what the Chairman’s Award is all about.”

This year’s honorees have created cabin repair kits to take care of common issues quickly and prevent unnecessary delays, made passengers feel comfortable and at ease, cared for their colleagues during terminal illnesses and more.

And then there’s Chuck, who has spent years filming Captains’ first flights — and their last, complete with that water cannon salute — and even placing signage in Operations areas to recognize important life events such as the birth of a new baby. It’s the little things that matter most. “Chucky is a brother, a father, a friend, a hero, a mentor to every one of the American Airlines employees at LaGuardia,” says Rose.

So, this year, it was Chuck’s turn. He joined 99 fellow honorees and their guests at the Mid-summer Night’s Dream-themed Chairman’s Awards, which included dinner and dancing. Much deserved for a man who has dedicated his life to serving others. “He has a heart made of gold,” says Captain John Imholz. “When he asks you for a favor, it’s never for Chucky — it’s always for somebody else.”

“It does feel like a family around LGA and Chuck is responsible for that,” says Captain Redden. “I’ve seen him greatly affect the operation, the morale of the crewmembers, and the love he shows for others has greatly affected lives and been a great lesson for us all.”