Joining Special Honoree Lester Kappel for the ribbon-cutting ceremony are Pan Am Museum Foundation board members’ Kelly Cusack and Linda Freire. They are assisted by Jerry Poller whose father Dave Poller was a flight engineer on the B314 and Metropolitan Airport News’ very own Ed Garcia whose father, also named Edward Garcia, was a Pan Am Purser on the B314.

Ed Garcia’s father was also a crew member of the historic first Air Force One flight that transported Franklin Delano Roosevelt to the Casablanca Conference in Africa.

Is Airport Temperature Screening a Violation of Rights? 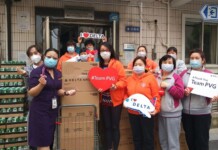