The Port Authority of New York and New Jersey today announced the completion of a new solar energy project at LaGuardia Airport. The solar installation on the rooftop of the newly built parking garage on the western side of the airport includes over 3,500 solar panels that will produce more than 1.7 million kilowatt-hours of clean, renewable energy annually as part of the agency’s net-zero emissions targets announced in 2021.

The new LaGuardia solar project – the Port Authority’s largest to date – joins six other Port Authority solar projects that now total more than 1,381 kilowatts of installed solar capacity and equate to an estimated 1.8 million kilowatt-hours of electrical energy, annually. And other projects are in the works, including a new 4-megawatt solar canopy at Newark Liberty and a 12-megawatt solar parking canopy project at John F. Kennedy International Airport.

The Port Authority was the first U.S. transportation agency to adopt the Biden administration’s ambitious climate goals, which set new net-zero targets for all emissions by 2050. The agency also committed to cutting direct greenhouse gas emissions in half by 2030 through facility-wide sustainability initiatives in the areas of electrification, renewable energy, and sustainable buildings/energy efficiency.

The new solar energy project at LaGuardia in partnership with ForeFront Power is the Port Authority’s largest completed solar project to date. It will reduce energy consumption by 5% and generate more than 1.7 million kilowatt-hours of solar energy per year – enough to power 164 homes annually. This measure will offset nearly 400 metric tons of CO2 emissions annually, equivalent to 434,000 pounds of coal burned in one year.

“The Port Authority continues to look for ways to bring innovative technology to its facilities and here at LaGuardia Airport we are moving toward a greener future with the addition of thousands of new solar panels ready to power parts of the airport,” said Kevin O’Toole, Chairman at the Port Authority of New York and New Jersey. “We could not be more excited to see projects like this across the agency, creating cost savings while providing clean energy.”

“Renewable energy sources must dominate our future, and the Port Authority is proud to unveil its newest solar installation at LaGuardia Airport as part of our commitment to being a leader in sustainability throughout the region,” said Rick Cotton, Executive Director of the Port Authority of New York and New Jersey. “Today’s opening at this 1.34-megawatt solar installation is only the leading edge of our agenda to shift to renewable energy sources across our facilities.”

“We are proud to be ‘building the future’ with the LaGuardia Airport and the Port Authority of New York and New Jersey,” said Michael Smith, CEO of ForeFront Power. “The visually stunning Terminal B is an inspiration. Seeing this beautiful new iteration of the airport helps one reimagine what is possible when combining modern, thoughtful architecture with a strong commitment to sustainability, including the 1.34-megawatt rooftop solar array that our team is proud to have built. Traveling through LaGuardia as a LEED-certified airport now powered by the sun does indeed feel like stepping into the future.”

“As we celebrate Earth Day this Friday, we are reminded that we need to seize every opportunity we can to reduce the greenhouse gas emissions that are harming our planet,” said Queens Borough President Donovan Richards Jr. “This solar rooftop at Terminal B in LaGuardia Airport will do just that by providing a clean source of energy for this beautiful new terminal, reducing its reliance on fossil fuels. Queens commends the Port Authority for doing its part to combat climate change, which continues to pose a grave threat to us here in The World’s Borough and beyond.”

“I am delighted that the Port Authority has incorporated solar power into LaGuardia’s parking garage. This should become the norm in New York and throughout the nation,” said NYS Assemblyman Steve Englebright, Chair of the Committee on Environmental Conservation. “As the author of New York’s Climate Leadership and Community Protection Act, I can state with certainty that this innovation is exactly what is needed to reduce harmful greenhouse gas emissions and to help avoid the worst effects of climate change”

“Solar energy is a central part of New York’s overarching strategy for decarbonizing the power grid, making electricity more affordable, and reducing harmful emissions to improve air quality and public health,” said Doreen Harris, NYSERDA President, and CEO. “The Port Authority’s milestone project at LaGuardia will ensure one of the state’s premier airports is powered by renewable solar energy for years to come and is another example of the leadership demonstrated by state authorities and agencies in New York when it comes to the clean energy transition.”

“The New York League of Conservation Voters is excited to see 3,500 solar panels installed at LaGuardia Airport to provide the Port Authority’s first-ever solar rooftop,” said Julie Tighe, President of the New York League of Conservation Voters. “This initiative will cut reliance on polluting fossil fuels; supply clean and renewable energy to the airport and its thousands of travelers every day; and support the agency, as well as New York’s, net-zero emissions goals.”

“The solar industry applauds the Port Authority of New York and New Jersey’s completion of this 1.34-megawatt solar project and its commitment to net-zero emissions by 2050,” said Zack Dufresne, executive director of the New York Solar Energy Industries Association (NYSEIA). “This new solar project at LaGuardia is a concrete step towards reducing our state’s carbon emissions and modernizing our infrastructure as we work towards building a clean energy future. We look forward to continuing to realize creative partnerships that drive clean energy solutions, and the direct and immediate benefits this project will deliver to New Yorkers.”

The Power Purchase Agreement (PPA) enabled the Port Authority to develop its project at no upfront cost and without using bond funds. In exchange, ForeFront Power will operate and maintain the system at no cost and charge the airport a fixed, below-market rate for electricity, which is locked in for the 20-year duration of the agreement. LaGuardia will achieve a low fixed rate for electricity, as well as budget certainty by avoiding utility rate increases for decades to come.

In 2018, the Port Authority embraced the Paris Climate Accords making it the first transportation agency in the country to do so. In 2021, the agency committed to a new goal of net-zero emissions by 2050 and a 50% reduction of its direct greenhouse gas emissions by 2030, becoming the first transportation agency in the nation to adopt the Biden administration’s climate goals. As part of these goals, the agency has also committed to a 100% electric light-duty vehicle fleet by 2030, a 50% electric medium and heavy-duty fleet by 2035, and has implemented new requirements for clean port material handling equipment, embracing a full gamut of responses to the climate crisis. These tangible actions will continue to reduce the agency’s direct and indirect emissions through facility-wide sustainability initiatives in the areas of electrification, renewable energy, and sustainable buildings/energy efficiency and are expected to create nearly $600 million in economic activity over the lives of the various projects.

Additionally, the agency’s Clean Construction Program, one of the most ambitious programs of its kind among U.S. transportation agencies, will reduce carbon emissions throughout the design and construction processes. This important measure ensures that a minimum of 75% of concrete, asphalt, and steel construction waste is diverted from landfills and incorporates LEED and Envision-equivalent standards for environmentally-friendly infrastructure design, advancing the Port Authority’s commitment to reducing emissions and leading the transportation sector towards a low-carbon and more sustainable future.

The Port Authority is a member of the Global Commercial Drive To Zero program and campaign, a coalition focused on the electrification of transportation as well as the World Economic Forum’s Clean Skies for Tomorrow coalition, which focused on the adoption of Sustainable Aviation Fuel.

About the LaGuardia Redevelopment Project

In 2015, a comprehensive plan to construct a whole new LaGuardia Airport was unveiled with the goal of creating a world-class, 21st-century passenger experience featuring modern customer amenities, state-of-the-art architecture, more spacious gate areas, and a unified terminal system. The $8 billion project, two-thirds of which are funded through private financing and existing passenger fees, broke ground in 2016.

LaGuardia Airport’s newly completed Terminal B received the UNESCO’s 2021 Prix Versailles, the global architecture and design award, for best new airport in the world. This significant award fulfills the agency’s promise to transform what was once regarded as the nation’s worst airport, into a world-class facility ranking among the best in the nation.

LaGuardia Terminal B was also the first airport in the world to achieve LEED (Leadership in Energy and Environmental Design) Version 4 Gold Certification for Sustainability — meeting high standards in the areas of energy efficiency, water conservation, selection of environmentally preferable materials, and waste reduction. For example, nearly 100 percent of the debris that was recycled from the Terminal B Garage demolition was used for new construction – saving a total of 250,000 miles that would have been driven by trucks carrying materials to and from the site, all while reducing traffic on community streets. And across the airport, as LaGuardia’s Terminal C Arrivals & Departures Hall nears completion, the agency continues to make sustainability a core priority and take steps to reduce the environmental impact in the region, particularly in Queens. 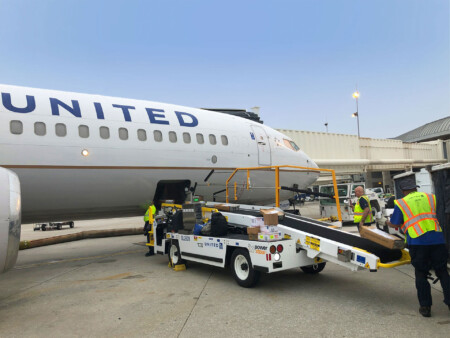