After a successful 25-year tenure, the founder and CEO of LATAM Airlines, Enrique Cueto, will step down from the helm of the largest carrier in Latin America in March 2020.

Cueto’s impeccable track as the CEO of former LAN Airlines took the carrier to the cusp of the Latin American commercial aviation scene by merging it with Brazilian carrier TAM Airlines (then forming LATAM Airlines).

The carrier links its hubs in Santiago, São Paulo, Buenos Aires, Guayaquil, Quito, Lima, and Bogota with more than 140 global destinations in 26 countries, including North America, Europe, and Oceania.

The decision to step down as Chief Executive Officer comes after LATAM Airlines managed to fly through a somewhat turbulent five years. Cueto and his team not only had to cope with the merger of six different airlines (LAN Chile, LAN Ecuador, LAN Argentina, LAN Peru, and TAM) but also the integration of six different cultures into one cohesive organization.

LATAM Airlines notes that Cueto’s decision to step down comes at a moment that finds the holding company “in a much more solid position, with subsidiaries in seven countries and dominating the Latin American market,” according to a statement released by the airline.

“Today we are the leaders in the connectivity of the [Latin American] region with the rest of the world,” said Ignacio Cueto, the President from the Board of Directors of LATAM Airlines Group. “We are within the most punctual airlines in the world and with a service distinguished by millions of customers and we have considerably improved our financial state.”

Ignacio Cueto, Enrique’s brother, added that he and his team are “confident that Roberto Alvo’s leadership and deep knowledge of the industry “will lead us to fly even higher, maintaining the preference of the more than 70 million passengers we transport per year and become one of the most admired airlines of the world.”

Roberto Alvo Milosawlewitsch, who currently holds the title of Chief Commercial Officer at the airline, has a vast 18-year track with LATAM Airlines Group.

Alvo previously worked in the airline’s Finance, Fleet, Planning and Commercial departments, and was CEO of the airline’s Argentinean subsidiary, LAN Argentina.

According to LATAM Airlines, Alvo’s designation as the new CEO of LATAM Airlines was voted unanimously by the Board of Directors. 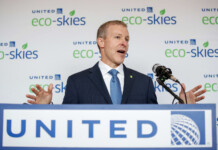