One of the few remaining vestiges of the golden age of piston-powered air transport in the New York area resides in the outside display yard of a small air museum in Teterboro, NJ. The Aviation Hall of Fame and Museum of NJ’s Martin 202A also represents the very last of its kind. Of the 48 of these early post-war short to medium range twin-engined airliners constructed only this one remains. 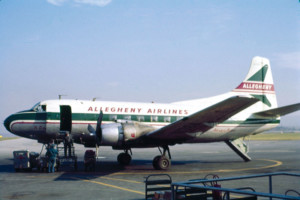 Built in 1950 “N93204” was ordered by Trans World Airlines (TWA) as a stop-gap aircraft until the legendary carrier’s larger pressurized Martin 404 fleet arrived. The original “202” model had suffered from nearly immediate metal-fatigue problems involving its wing spar. The then modified 202A was offered for a short time prior to the 404, thus the small production run of any model 202. TWA flew 12 leased from the manufacturer and used N93204 for most of the 1960’s. Allegheny Airlines then flew it for several years in the 1960’s.

The airplane is believed to have then been stored at Wildwood Airport in Southern New Jersey for about 15 years starting in the late 1960’s and ending with the museum’s acquisition of the airframe in the early 1980’s. A few years later the airliner’s 35 seat cabin was opened to the public. Since that time tens of thousands of museum patrons, many of them children, have had a chance to get a feel for what it might have been like to fly out of nearby Newark airport in a classic “propliner” nearly 70 years ago.

During the past three years a nearly complete cabin restoration has been completed on N93204. By the spring of 2018 the museum expects to have a cockpit restoration finished as well. What remains is to repaint an exterior that has borne the brunt of New Jersey weather (and less than optimal air quality) since it was last refinished in generic white paint over three decades ago. The wear on the current finish is so bad that the once unseen Allegheny “Speed-Wedge” logo on the vertical stabilizer is becoming visible again.

Estimated cost to do a complete strip and repaint in full period Allegheny colors, taking environmental regulatory costs into account, has been estimated at $60,000. The museum hopes to be able to accomplish this in stages over a period of years as this is quite a large sum for a relatively small institution.

In the meantime, the public will at least be able to fully enjoy the inside of one very rare and special airliner residing at historic Teterboro Airport.

Having what might be described as an encyclopedic lifetime knowledge base of U.S airline history (especially during the Jet Age period, 1958-78) Shea has crafted multiple feature articles on airline history topics for Airliners Magazine. He is Book Review Editor (and a feature article contributor) for the Captain’s Log, the quarterly journal of the WAHS, as well as being a regular author of articles covering airline history on NYCaviation.com, a highly successful and respected weblog known far beyond the New York area. In recent years he has become part of the New Jersey Aviation Education Council and the Airline Historians/Archivist Association.