Newark Liberty Celebrates Past, Present & Future With Ceremonial Groundbreaking for New Terminal One and Commemoration of Airport’s 90th Birthday

Port Authority leaders and numerous elected officials celebrated Newark Liberty International Airport’s (EWR) rich 90-year history today by turning their sights to the future, highlighting the development of the airport’s new Terminal One. The new facility will provide a world-class experience for fliers with the replacement of the outdated Terminal A.

Port Authority Chairman Kevin O’Toole and Executive Director Rick Cotton, joined by state and local officeholders that included Senate President Steve Sweeney and Assembly Speaker Craig Coughlin at the site of the terminal construction at Newark Liberty, praised the project as a vital Port Authority investment in the state and region’s economy and transportation infrastructure. The current Terminal A, which opened in 1973, was designed with a maximum capacity of nine million passengers a year. It served more than 11 million fliers in 2017 and is functionally obsolete.

Terminal One, in its initial year of full operation by 2022, will be able to accommodate 13.6 million passengers on three levels – with the potential for further expansion – and will feature 33 common-use gates to handle larger aircraft within one million square feet of terminal space, as well as state-of-the-art check-in, security and baggage claim areas.

New Jersey Governor Phil Murphy said: “As a powerful economic engine, the new Terminal One at Newark Liberty will set standards for 21st century terminal design, customer amenities and operations. It will create high-paying union construction jobs in the near term, while laying the groundwork for regional economic growth for generations.”

“The Port Authority is committed to its core mission of improving safe travel within the region and beyond, improving our economy and enhancing the passenger experience,” said Port Authority Chairman Kevin O’Toole. “The new Terminal One will help achieve that goal by providing first-class customer amenities for tourists, business travelers and recreational travelers who use Newark Liberty in the future.”

“The Port Authority is transforming Newark Liberty and its other airports into a world-class operational system with best-in-class customer amenities,’’ said Port Authority Executive Director Rick Cotton. “Our New Jersey and New York airports must be 21st century gateways befitting the importance and stature of the metropolitan area, comparing favorably with any airport in the world in providing top shelf customer experience for all passengers.”

“New Jersey’s transportation infrastructure network plays a vital role in the continued growth of our state’s economy and this project will mean tens of thousands of high-paying construction jobs and a boost to the Garden State’s long-term economy,” said NJ Senate President Steve Sweeney.

“The largest design-build project in the state’s history, the Terminal One project will overhaul the airport’s oldest terminal to better meet the growing needs and expectations of the modern traveler, and transform Newark Liberty International Airport into a world-class facility,” said Assembly Speaker Craig Coughlin (D-Middlesex). “It will make traveling more enjoyable for passengers, create thousands of jobs and stimulate the regional and state economy. This is just one of the great economic development stories coming out of our great state, and a great way to celebrate the airport’s 90 years of service.”

Newark Airport opened on October 1, 1928 as the first major airport in the New York-New Jersey metropolitan area. Newark was the first airport in the country with paved runways and an air traffic control tower, and the second with a terminal building. After 9/11, the airport was renamed Newark Liberty International Airport to honor those who lost their lives in the terrorist attacks.

Work on Terminal One will be phased to minimize customer inconvenience. The terminal is scheduled for a partial opening with 21 gates ready for use in 2021, as well as the completion of a new parking facility. By 2022, the new Terminal One is expected to be fully operational with the addition of 12 more gates. A covered pedestrian bridge will provide direct terminal access for passengers using AirTrain Newark.

Through a fixed-cost, design-build contract that will incentivize innovative ideas and transfer project delivery risk to the private sector, the new terminal will be designed and built by Tutor Perini/Parsons, a fully integrated joint venture between Tutor Perini Corporation and Parsons Transportation Group Inc. Plans call for the goal of achieving a LEED Silver rating, with sustainable building materials that include solar panels to help power the facility.

The new terminal will address the shortcomings of the current antiquated facility, which includes cramped areas for check-in, security and baggage claim, as well space constraints on frontage roads. Designed as a “common use” terminal, all gates in the new terminal will be utilized by multiple carriers, which will increase flexibility and efficiency, and optimize operations.

Airside improvements for planes entering and exiting gates at the new Terminal One are also in the plans, including a new aeronautical taxi-lane network to increase efficiency in operations. Addition of dual taxi-lanes, a project to be done in conjunction with the terminal work, also will help get planes to and from gates faster.

Best-in-class retail options will be offered, with more shops and restaurants post-security compared with the current terminal’s retail – much of which is located before the security area. Retail outlets and restaurants are expected to include the best of the New Jersey and the metropolitan area’s offerings, along with some farm-fresh and local products.

Newark Liberty currently provides jobs for approximately 21,000 people directly employed at the airport. It contributes more than $27 billion in economic activity to the New York-New Jersey metropolitan region and generates nearly 190,000 total jobs and more than $9 billion in annual wages. The goal is to award certified Minority- and Women-Owned Business Enterprises a significant portion of sub-contract, vendor and consulting work within the project. 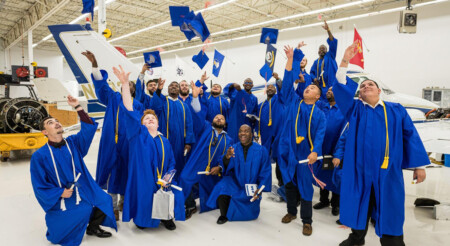