On December 5, another piece of Pan Am’s history was added to the airline’s permanent exhibit at the Cradle of Aviation in Garden City, NY. “The Pan Am Saga”, a historical timeline, traces the beginning of Pan Am in 1927 to its slow demise and fall in 1991, highlighting moments in the company’s history. John Luetich, the curator and historian, spoke of the difficulty in distilling 64 years of this iconic airline into the events pictured on “my wall” as he lovingly called it.

Ed Trippe, son of the Pan Am founder Juan Trippe was present for the unveiling and referred to his father, a monumental figure in aviation history as just “a normal guy”, and is still somewhat in awe of his legacy.

A large group of former Pan Am employees, family members, friends of Pan Am and, aviation buffs attended the event and witnessed the ceremonial ribbon cutting by John Luetich, Ed Trippe and, board member Linda Freire, unveiling the exhibit to the public. 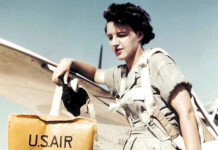 Lillian Yonally – A Life in Color 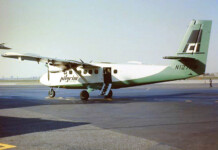 From Pilgrim Airlines to American Eagle: Flying the Northeast 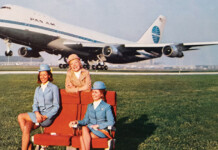 The Pan Am Museum Foundation Exhibit at the Cradle of Aviation