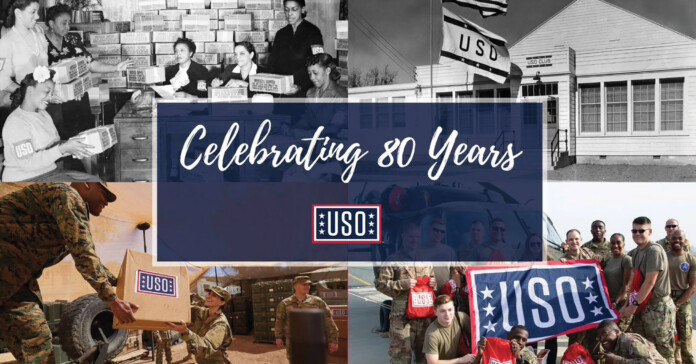 On December 29, 1940, in a radio broadcast delivered by President Franklin D. Roosevelt to the nation, the President promised to help the United Kingdom in the fight against Nazi Germany by producing and furnishing military supplies. During this period, the United States stayed out of the actual fighting. “We must be the great arsenal of democracy. For us, this is an emergency as serious as war itself. We must apply ourselves to our task with the same resolution, the same sense of urgency, the same spirit of patriotism and sacrifice as we would show were we at war.” – F.D. R.

By early 1941 the United States was on the brink of entering the worldwide conflict and with the mounting strain of the country’s involvement in the battle against the Axis powers, the U.S. military was growing in leaps and bounds. Since there was no individual agency in place that focused on supporting the troops, Roosevelt grew concerned about the morale and welfare of U.S. military personnel deployed to fight for the defeat of the Axis forces in Europe and the Pacific theaters of operation.

Seeking to connect a number of service associations into one organization, the YMCA, YWCA, the Jewish Welfare Board, Catholic Community Charities, Travelers Aid Society, and the Salvation Army worked in partnership to create the United Service Organizations, more commonly known as the USO. As a founder and under the direction of social reformer, Mary S. Ingraham, the USO was established and incorporated in New York on February 4, 1941, with the mission to provide social and recreational opportunities and resources for U.S. armed forces on leave at stateside club locations, where service members could socialize and enjoy leisure time while getting a taste of being at a home away from home. As a congressionally chartered, private organization that was not part of the federal government, this partnership, with the support of Americans, set a precedent for volunteerism. After the attack on Pearl Harbor on December 7, 1941, and in the first years of its existence, the USO opened about 3,000 clubs and canteens across the country and globe, operating out of established and newly constructed buildings, including homes, museums, churches, barns, railroad sleeping cars and mobile units. According to USO historical documents, at its peak of operation in March 1944, the USO had an estimated 1.5 million volunteers helping out during the Second World War, becoming an essential part of the war effort by offering entertainment and recreational activities to the troops, including now legendary overseas USO Camp Shows to members of the armed forces overseas and on the front lines.

Keeping in pace with the era’s gender roles, USO clubs sought venerated women from the local community to hold the position of senior hostess, and they coordinated junior hostesses and large-scale activities and dances at the clubs. The clubs served coffee, cookies, donuts, and sandwiches, but were alcohol free. Stationary was offered to write letters, cots to take naps. A button-sewing service was available to keeping uniforms neat, as were the latest phonograph records to listen to. Regular religious services took place and servicemen danced with the many USO hostess volunteers who brought the clubs to life. Mobile USO units with generators were equipped with screens and projectors to show films and many were furnished with a public address system, books, board games, sporting gear and snacks. With thousands of women entering the work force in support of the war effort and their husbands deployed, select USOs began their own daycare operations.

Between 1941 and 1947, the USO hosted over 400,000 Camp Shows with some 7,000 volunteer entertainers that included Marilyn Monroe, Frank Sinatra, Humphrey Bogart, Fred Astaire, Marlene Dietrich, The Andrews Sisters and many more. The most notable celebrity to entertain troops was Bob Hope who devoted 48 Christmases overseas with American troops. His contribution created a legacy that started in 1941 and ended in 1991 during Operation Desert Shield.

The USO was disbanded at the end of WWII, largely due to the lack of funding, but in 1950 when the United States entered the Korean War, Secretary of Defense George Marshall and Secretary of the Navy, Francis Matthews requested that the USO be restored ‘’to provide support for the men and women of the armed forces with help of the American people.” By the end of the Korean War in 1953, over 113,000 USO volunteers worked at 294 centers in the United States and abroad. In the 1960s during the Vietnam War, 23 USO clubs operated in Vietnam and Thailand serving as many as one million troops per month with home away from home support. In the 1970s when the draft ended, the USO commenced a new era of service that included new programs to assist military personnel with an effective transition into civilian life. Outreach programs were initiated worldwide, and additional centers were set up at airports to assist military travelers with layovers, connections, missing luggage, language translation and dignified transports. A Memorandum of Understanding with the Department of Defense was signed in 1987 stating, ‘The USO is the principal channel representing civilian concern for the United States armed forces worldwide’. Since then, USOs have provided support internationally to active-duty U.S. military personnel in the Gulf War Operation Desert Shield, Afghanistan and Iraq in Operations Enduring Freedom and Iraqi Freedom.

Jessica McAndrews, Vice President, Programs, Services & Operations for USO Metropolitan New York recently spoke to Metropolitan Airport News and discussed how in the 80 years of its existence the USO has changed, while a lot has stayed the same, saying, “Men and women are deployed both overseas and now in our own backyard with everything going on over the past year. Our world has always been to be there for those in uniform and we have come to recognize that families are equally as important.”

McAndrews continued that the feedback that is most continuously received in talking to service members is, “You do so much for us with USO centers, entertainment tours, care packages, phone cards…. but, sometimes when deployed the thing we most worry about is our family back home.”

As such, programming has changed over the years to focus on family and make sure they are taken care of by providing more services for family members… spouses and kids.

In addressing how the USO handled operations in light of the pandemic, McAndrews emphasized that with 30,000 volunteers worldwide, the USO has always been heavily dependent on them, and as a volunteer run organization with few staff members, volunteers are relied on for everything. With the alarming spread of the coronavirus in March 2020, the USO had to pivot and suspend operations at volunteer run centers in order to maintain safe environments and avoid the risks of exposure to both service members, military families and USO volunteers. “Since the onset of the pandemic, thousands of service members have been deployed on urgent public health missions throughout our area and play an essential role in keeping our communities healthy and safe. During these unprecedented times, it is crucial that we continue to adapt to the needs of our military community, delivering morale boosting programs at a time when it is needed most so they can remain focused on their missions”, asserted McAndrews.

With the crisis of the pandemic and the sudden closure of USO centers, more military personnel and National Guard were deployed to the New York metropolitan vicinity to assist with covid relief than had been seen in the area in a long time. Military and National Guard were assigned to mortuary duty, to help by checking on people, and to staff vaccination sites. Unmanned centers were opened to National Guard and military personnel. At John F. Kennedy Airport, the usually manned center for travelers coming through was closed down for a while since so few were traveling. A center was available at JFK for the National Guard to use as a break room and for those deployed with the Empire Shield team to help travelers with travel forms. Other downtown New York transit hubs using USO centers operated in the same way at locations where the military has been. With no opportunity to set up brick and mortar type tents under the conditions of the Covid 19 pandemic, the USO provided drop off supplies such as snacks, beverages, exercise equipment and morale boosting materials to different locations, including the Javitts Center and the U.S.S. Comfort.

Even though the global pandemic suspended face to face in-person social activities, concerts and shows, that did not stop the USO from providing entertainment to service members and their families as the USO shifted live performances from aircraft carrier decks and bases around the world to virtual experiences. These experiences connected USO entertainers to military service personnel through Virtual USO tours, where musicians, actors, comedians, and others livestreamed video Q&A’s and performances directly to bases and service member’s cell phones. Other morale boosting parts of the USO’s live celebrity tours for deployed troops provided the opportunity for celebrities to meet service personnel individually, to allow them the chance to shake the hand of a man and woman in uniform and thank them for their service.

Programming also shifted to drive-through distributions of craft and snack bags for children, virtual programming for families with events such as online ‘Frozen’ parties. In partnership with the Bob Hope Legacy, the Bob Hope Legacy Reading Program enabled a service member to read his or her child a bed-time story from halfway around the world in a makeshift mobile ‘reading room’. The book reading is video recorded with the service member reading their kid’s favorite story and then the video is shipped home to their child.

With covid vaccinations becoming more accessible, the majority of USO volunteers and staff have received them and currently many suspended activities are just starting to get back and running. In New York City, despite the absence of ships during Fleet Week on Memorial Day weekend, the USO delivered morale-boosting ‘Feed the Crew’ meals, making pit stops at the Naval Submarine Base in Groton, Connecticut. Other programs included a bike build for military kids, and ‘Operation That’s My Dress ‘, where 400 prom dresses were given out for prom season in a socially distanced manner for military families only. At LaGuardia and Newark Airports, large troop movements of West Point cadets move back and forth for medical checks. The USO also provides homecoming activities with food and entertainment for families awaiting returning veterans. Career transition and mentor support are available, offering training that ranges from employment opportunities, financial readiness to educational resources and veteran’s benefits. Additionally, support is offered for veterans who may need assistance with psychological issues such as Post Traumatic Stress Disorder (PTSD).

Speaking of its volunteers as the heart of the USO, especially during the pandemic, Jessica McAndrews told of their dedication in going above and beyond in their support of service members and their camaraderie both inside and outside their work with the USO, “Without our volunteers, we could not do what we do. They have been amazing…driving around, dropping off food, beverages, and supplies. Offering their time in a limited capacity has been difficult for them as they want to do more.”

And as operations gradually return to a pre-pandemic level, she added, “Volunteers, come back..we need you!”

Today, with some 250 centers worldwide and an 80-year history of exemplary service, the USO’s mission endures in providing those who serve the nation a warm, family home away from home. McAndrews, a Navy veteran of 11 years and now with the USO for ten years said, “No matter where you are, look for that USO logo. From the moment you leave New York at your airport, to the moment you deploy, or at your duty station in the middle of nowhere, and upon your return home, we’ll take care of you.” 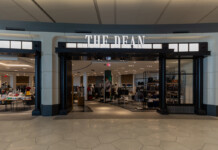 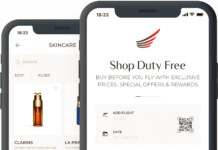