A Transportation Security Administration officer spotted what looked like an improvised explosive device in a man’s carry-on bag early this morning, resulting in the temporary closure of several security screening lanes at Newark Liberty International Airport until authorities could determine that the item was not the bomb that it was designed to mimic.

The man was traveling to Florida to participate in a training event focused on X-ray detection of explosive devices and as such, he was carrying a test item that was built and designed to mimic a fully-assembled bomb when viewed on an X-ray monitor. Indeed, the item was a realistic replica explosive device.

TSA officials notified Port Authority Police, who responded to the scene and after conferring with TSA explosives experts, officials contacted the Essex County Bomb Squad to ensure that the item was inert.

The incident took place just one week prior to the 17th anniversary of the 9/11 terrorist attacks.

To ensure the safety of the passengers who were eager to catch their flights, six checkpoint lanes were temporarily closed and travelers shifted to other available checkpoint lanes to keep them at a safe distance from the device until the bomb technicians were able to verify that the item was a realistic replica bomb and was not harmful. At that point, the checkpoint lanes were reopened and security screening resumed.

The man was arrested by Port Authority Police.

“Security is no joke,” said TSA’s New Jersey Federal Security Director Tom Carter. “Our TSA Officer who was staffing the X-ray monitor identified what appeared to be a fully assembled IED and reported it to her supervisor. Everyone reacted to the event properly. Law enforcement was called in and a safety perimeter was established until such time as it was deemed safe to resume normal operations.

“The item was built to look exactly like an explosive device. The terror threat is real and we do not take chances when it comes to protecting the lives of travelers,” he said. “We have a great working relationship with our law enforcement partners and we thank them for their response to this unfortunate incident. The individual who brought this device to the checkpoint knew he had a replica bomb with him and as such, he should have known better than to bring it to an active checkpoint. His foolish actions inconvenienced hundreds of passengers today.” 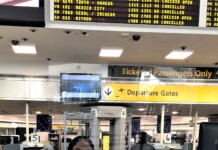 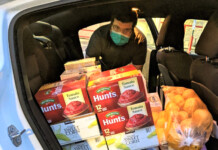