The Port Authority of New York and New Jersey announced the signing of a long-term ground lease agreement with Aeroterm to develop a state-of-the-art $145 million, 350,000-square-foot cargo facility on more than 26 acres at John K. Kennedy International Airport.

The first new cargo facilities built at JFK in two decades, the Aeroterm project represents a significant step forward in the JFK Vision Plan outlined by Governor Andrew Cuomo. The project is part of a comprehensive Port Authority strategy to bring 21st-century standards to cargo operations at all of its commercial airports.

The Aeroterm project will demolish two obsolete facilities at JFK and build an expanded, best-in-class cargo facility that will incorporate advanced technology systems designed for maximum efficiency in the handling and storage of cargo, as well as a dedicated temperature-controlled area for handling pharmaceutical products.

With its cutting-edge systems, the new facility will include greater ramp capacity to handle three of today’s large modern air cargo freighters (Group VI aircraft) simultaneously. It will also have more than 50 dock doors for the efficient transfer and tracking of goods through the facility.

Demolition of the existing facilities is scheduled to begin in September 2021, with project completion expected by the end of 2023.

“This cargo modernization program is a critical step forward in the overall redevelopment of JFK airport, at a time air cargo is vital to our regional economic vitality,” said Port Authority Chairman Kevin O’Toole. “We look forward to working with Aeroterm to raise our cargo capabilities to state-of-the-art standards.”

“Throughout the pandemic, JFK has shown its importance and resilience as one of the nation’s most in-demand cargo centers,” said Port Authority Executive Director Rick Cotton. “Governor Cuomo’s Vision Plan for JFK included strong support for cargo as a key piece of the redevelopment, and this project will create jobs, boost the local economy and produce a world-class cargo operation.”

The Port Authority and Aeroterm – the leading provider of facility-related services to airports throughout North America – are working closely with Worldwide Flight Services (WFS), the main cargo handler at JFK which is scheduled to operate exclusively out of the 350,000-square-foot facility once it is completed.

Working with more than 270 major airlines and airports globally in the cargo and ground-handling business, WFS will bring international expertise and efficiency to the first-class facility Aeroterm is building. In 2020, 1.2 million tons of cargo were processed at JFK, putting it among the top seven airports nationwide.

“This project is a key step in revitalizing JFK’s air cargo sector, and we are proud to work alongside the visionary Port Authority executive team,” said Aeroterm Vice President for Development Greg Russell. “Additionally, we’ve been honored by the broad support this project has received from elected officials, government, and community leaders. We look forward to kicking off this exciting project.”

“In a business that is all about efficiency, a facility of this magnitude and location will see WFS use its know-how as the world’s leading cargo handler to bring the best services to all industries that depend on air freight,” said WFS Executive Vice President Mike Simpson. “JFK has a major opportunity right now to expand its cargo operations, given its location and direct access to all of the major airport hubs worldwide. This new streamlined facility will be able to handle significant cargo volumes, ease cooperation between airlines operating within carrier alliances and optimize the use of technology, equipment and resource planning.”

“As co-chair of the JFK Airport Redevelopment Advisory Council, I’ve seen firsthand the commitment for community inclusion and consideration of neighborhoods directly impacted by these projects,” said Congressman Gregory W. Meeks. “This is one of the many examples of the tremendous work the Port Authority has been doing. This new cargo facility will create new jobs as well as MWBE and local business contracting opportunities. This work is vital to an equitable recovery for Southeast Queens.”

“Kennedy Airport is the gateway to our city and a one of the largest economic generators of the entire region. By reimagining how we handle cargo at JFK, we’re investing in the long-term economic health of Queens and the city as a whole,” said Queens Borough President Donovan Richards Jr. “I look forward to working with the Port Authority and all our partners to ensure local hiring and sufficient MWBE participation is at the forefront of this development. Queens expects and deserves nothing less.”

“This was a challenging process from start to finish, but all of the players came together in a manner and during a time that made this project an imperative to get Queens and JFK Airport back on track,” said Thomas J. Grech, President & CEO of the Queens Chamber of Commerce. “This project hit the high notes on all three key pieces of Governor Cuomo’s vision for JFK: cargo modernization, expanding opportunities for minority- and women-owned business enterprises, and union labor employed by a world-class leader in facility-related services with Aeroterm. It was an honor to work with Executive Director Rick Cotton and Aeroterm Vice President for Development Greg Russell to get this done.”

“We applaud Aeroterm and the Port Authority for this groundbreaking development that will bring needed facilities to the north cargo area,” said Scott Grimm-Lyon, Executive Director of GatewayJFK. “We support the efforts to modernize and consolidate freight operations at the airport so local businesses can benefit from the increased volume of belly cargo that is expected when redevelopment of the passenger terminals is completed.” 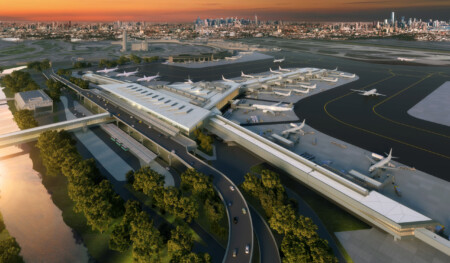 Next Phase in the Reimagining of Newark Liberty Moves Forward