More than 100 pilots have contracted COVID since the start of the pandemic and between 30 and 70 are in quarantine at any given time, Brian Gaudet, spokesman for the Independent Pilots Association said. The union chief suggested that a spike in COVID cases could disrupt UPS’ operations during the peak shipping season.

During a call with analysts to discuss UPS’ earnings, the carrier said that they are concerned about the recent rise in COVID cases around the world and that any outbreak among pilots would be “a real problem,” adding “we haven’t seen that, but we’re just watching this very, very closely.”

The union wants the airline to expand pilot access to testing — both before and after flight assignments — greatly improve the way it conducts contact tracing and utilize specialized medical evacuation flights, if necessary, to expedite the safe return home of pilots testing positive for COVID abroad, the IPA said.

The Atlanta-based parcel carrier is not following Centers for Disease Control and Prevention guidelines for contact tracing and notifying employees when they’ve had exposure to someone who has tested positive for COVID, the IPA also complained.

“The widespread perception among UPS pilots is that the company’s contact tracing efforts are flawed, inconsistent, and more geared to keeping flights moving rather than basing quarantine decisions on objective medical standards. At a minimum, the company’s actions in this regard lack transparency, and therefore generate no confidence among pilots that UPS is acting in the best interest of their health and safety,” Travis said.

On the other hand, unions have been known to take advantage of external issue to buttress their positioning on labor contracts. The IPA in March agreed with UPS on a two-year extension of their labor contract. Whether there are underlying decisions the union is trying to influence beyond health issues is unclear in the absence of a contract dispute.

Travis acknowledged that UPS has been able to repatriate sick crew members in many cases, but said it needs to use its clout to secure the release of an asymptomatic pilot who tested positive and is now hospitalized in Hong Kong against his will.

The pilot is sharing a small room with a very sick COVID patient who is being placed on a ventilator, according to the IPA.

“As part of UPS’s culture of safety, we have gone to tremendous lengths to keep our pilots safe during the coronavirus pandemic. We have equipped crewmembers with face masks, gloves, hand sanitizer and thermometers, educated them on social distancing on health protocols in areas where they fly, and enhanced cleaning protocols for our buildings, vehicles and aircraft,” Mangeot said.

“We have allowed our pilots to request alternate flight schedules, provided them with free, rapid COVID-19 testing, and worked with government entities to ensure our crews’ safe and healthy transit through nations around the world. 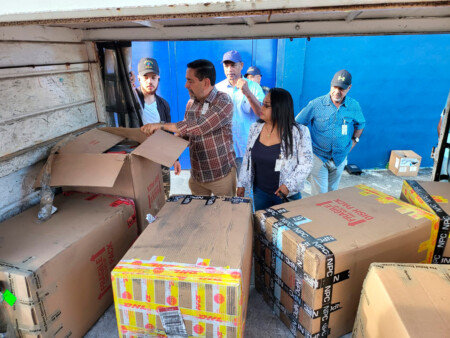