On the final approach into Burbank Airport (BUR), California, I gazed down at the ground from the window seat of the Airbus A321 that I had flown in on from New York earlier that afternoon. From the air, I wanted to catch a glimpse of the beautiful domed rotunda that encircles The Portal of the Folded Wings, located at Pierce Brothers Valhalla Memorial Park, a mile away from the airport.

Only two years earlier, The Portal would have been an unlikely destination for my travels, but it was there that I now would attend a delayed gathering for the unveiling of a bronze marker placed at The Portal in memory of a friend, aviation historian, and author, Giacinta Bradley Koontz, or simply ‘Gia.’

Designed by Kenneth MacDonald Jr. and sculptor Federico Giorgi, the Valhalla Memorial Rotunda, now known as the Portal of the Folded Wings Shrine to Aviation, was built on the eastern edge of Valhalla Cemetery in 1924 as the entrance to Valhalla Memorial Park. The shrine is a 75-foot-tall structure made of marble and mosaic, adorned with sculpted figures, and it is an example of Southern California’s distinctive Mission/Spanish/Colonial Revival architecture and Chumgueresque decorative styles. The Portal’s four facades are aligned with the major compass directions- north, south, east, and west. Its mosaic dome has a bursting star as the center motif and is surrounded by geometric, repeating designs emanating from the top. The interior domed ceiling is graced with a mural 40 feet in diameter, with its original background color of light-toned blue paint over the mortar and small gold stars.

After the opening of Burbank Airport in 1930 (then called United Airport), aircraft noise over the rotunda prompted cemetery management to close the east entrance. In 1937, aviation enthusiast James Gillette was struck by the proximity of the new airport and the region’s growing aviation industry to the Memorial Rotunda (which included Lockheed Aircraft), so Gillette began a movement to create a shrine to aviation at the site, which he worked toward accomplishing over the next two decades.

On December 17, 1953, the rotunda was re-dedicated as the Portal of the Folded Wings Shrine to Aviation in a ceremony presided over by Lt. Gen. Ira Eaker and aviation devotees who wanted a final resting place for pilots, mechanics, and other pioneers of aviation. Today, beneath its starry dome rests the cremated remains of the men and women who contributed so much to the history and development of aviation. Each grave is covered with a rectangular bronze marker, engraved with symbols of propellers and wings, and the shrine stands as a permanent tribute to them.

Over the next four decades, the building and graves within it deteriorated due to neglect. In 1994, a 6.8 magnitude earthquake in Northridge caused severe damage to the exterior of the structure and it was almost torn down. Convinced that the architecture was valuable enough to restore, the earthquake ironically led to the restoration of the Portal’s place in American aviation history.

In 1995, while researching the lives of early aviation pioneers, Giacinta Koontz’ explorations led her to the Portal of the Folded Wings in an attempt to locate the grave of aviator John Moisant, who was killed in 1910 while attempting a world altitude record in New Orleans. After a trip to New Orleans, she learned that his remains had been moved to the Portal in the 1960s.

Upon her first visit to the Portal, the structure was shrouded in scaffolding 100 feet tall. Gia wore a hard hat as she entered the area piled high with cement and tile debris. Plywood covered the floor and the graves that she wished to visit. As she lifted the planks over one of the markers, she saw Moissant’s name, barely legible beneath years of oxidized patina. While struggling to replace the plywood, she glimpsed the letters ‘T-A-Y-L-O-’ and held her breath as she read the next marker,

This would be the beginning of Gia’s chronicling of the achievements of pioneer aircraft mechanics that began with Charles Taylor, a man whose contributions to aviation were largely unrecognized and who was known as the man aviation history almost forgot. Gia later wrote in her book, ‘Pioneer Mechanics in Aviation’ published in 2011, “I realized that the current owners of the cemetery had no idea who these famous flyers were.” Above her head an airliner took off from Burbank Airport’s Runway 15 and the roar of the engines vibrated within the dome. “At that moment,” she said, “I vowed to find out everything I could about the history of this remarkable building and the aviation pioneers buried beneath the dome.”

As the Portal director, Gia posted many public events and tours, which included a special exhibit honoring Charles Taylor, highlighting the important role of aircraft designers and mechanics.

“Aircraft and Power Plant mechanics (A&Ps) often refer to themselves as ‘the unsung heroes of aviation,’ and my goal is to honor them by telling their story one mechanic at a time,” she wrote.

While the Wright Brothers are famously known for the first powered aircraft flight carrying a man at Kitty Hawk on December 17, 1903, it is little known that the Wright Flyer would never have lifted off the ground were it not for the Wright’s mechanic, Charles E. Taylor, the first Aviation Maintenance Technician (AMT) and the man who built the first aircraft engine.

When John Goglia, a National Transportation Safety Board member and former airline mechanic, visited the Portal and met Gia, he inspired her to help spearhead a movement to create state and national recognition for Charles Taylor, who today is considered the ‘Father of Aviation Maintenance’. By 2002 she assisted A & Ps, Ken MacTiernan, and Richard Dilbeck in writing the first state legislative Resolution for AMT (Aircraft Maintenance Technician) Day – The State of California.

AMT Day is celebrated each year on May 24th and honors Charles Taylor on the date of his birth and all Aviation Maintenance Technicians. Like Taylor, AMTs are the unsung heroes of air travelers and some of the hardest working men and women in the aviation industry. It is they who ensure every day the safety and security of civil and military aircraft. In 2008 Congress passed a resolution supporting the goals and ideals of National AMT Day. After several years of tireless effort, Senate Resolution #SRES335 passed in December 2016, joining Congressional Resolution #RES#444, recognizing May 24 as AMT Day, which is now observed in 45 states in the U.S.A.

“If you have ever owned a toolbox containing a wrench with which you serviced an aircraft, this month’s recognition is for you. And May 24th is your day because it is the birth date of Charles Edward Taylor.”
– Giacinta Koontz, CAMP InSight, May 2017

In her monthly column for CAMP InSight magazine, Gia wrote, ‘Many dozens of people helped push for Aircraft Maintenance Technician Day, but three key advocates are John Goglia, Ken MacTiernan, and Richard Dilbeck. Since 2002 Goglia, MacTiernan and Dilbeck have relentlessly gained state Proclamations and now, Resolutions in both the U.S. House of Representatives and the Senate. Goglia has been an aircraft mechanic and former NTSB official; MacTiernan is President of the Aircraft Maintenance Technicians Association and a long-term maintenance technician for American Airlines. FAA Flight Standards Office employee Dilbeck has gone beyond his job description to keep the Charles Taylor Master Mechanic Award program on track.’’

The Charles Taylor Master Mechanic Award is an honor presented by the U.S. Federal Aviation Administration (FAA) and recognizes the lifetime accomplishments of senior aviation mechanics. It is the most prestigious award the FAA issues to persons certified under Title 14 of the Code of Federal Regulations (14 CFR). The award recognizes individuals who have exhibited professionalism, skill, and aviation expertise for at least 50 years in the aircraft maintenance profession as “master mechanics.” A distinctive certificate and lapel pin is issued after application review, and eligibility requirements have been met. Upon request, a stickpin similar in design to the lapel pin is also provided to the award recipient’s spouse in recognition of his or her support to the recipient’s aviation maintenance career.

Once the award has been issued, the recipient’s name, city, and state are added to a published “Roll of Honor,” located at www.faasafety.gov.  As of this year, 359 AMTs from New York, New Jersey, and Connecticut have received the award, and their names are listed on the Roll.

On the first Sunday of May, I stood inside the Portal of the Folded Wings and looked down upon the bronze marker that is placed over Charles Taylor’s final resting place. Above my head, the roar of an airliner’s engines that had taken off from Burbank vibrated within the dome. Looking around at the surrounding markers, I read the names of people who had made my five-hour flight across the country possible. Then looking toward Gia’s, I thought about how she had saved the beautiful building surrounding me; how instrumental she was in preserving the memory of those who were interred there for future generations. As the passionate, insightful historian and writer that she was, she unearthed their legacies alongside Charlie Taylor’s, and she helped bring them to the forefront. Then I said, quietly, “This is your legacy, Gia…here for posterity.” 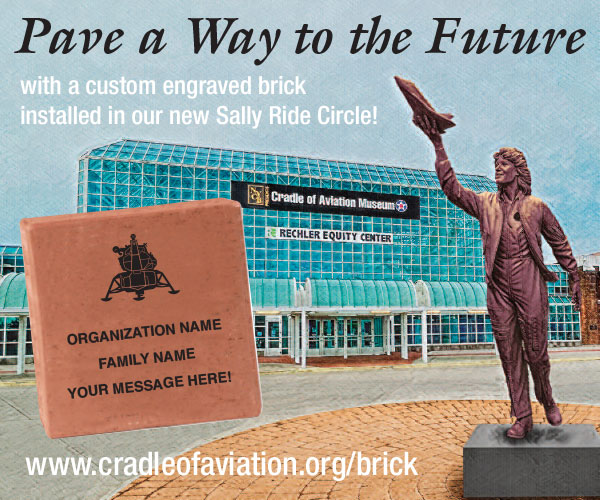