The Department of Homeland Security (DHS) has extended the REAL ID enforcement date by 24 months, from May 3, 2023, to May 7, 2025, giving travelers additional time to ensure they have driver’s licenses or identification cards that meet the security standards established by the REAL ID Act. As required by the law, following the enforcement deadline, federal agencies, including the Transportation Security Administration (TSA), will be prohibited from accepting driver’s licenses and identification cards that do not meet these federal standards.

The extension is necessary, in part, to address the lingering impacts of the COVID-19 pandemic on the ability to obtain a REAL ID driver’s license or identification card. REAL ID progress over the past two years has been significantly hindered by state driver’s licensing agencies having to work through the backlogs created by the pandemic. Many of these agencies took various steps in response to the pandemic, including automatically extending the expiration dates of driver’s licenses and identification cards and shifting operations to appointment-only.

Travelers who want to board an airplane will need a star or flag on their New York state driver’s license, indicating that it is a REAL ID-compliant credential or another form of approved identification to board their flight or enter a secure federal facility. New York’s REAL ID-compliant driver’s licenses and ID cards have a star inside a black circle in the upper right corner. New York state-enhanced IDs have a flag in the corner and are also valid for boarding a flight.

Travelers are not required to get a state-issued REAL ID; however, starting May 2025, if a traveler typically uses their driver’s license or non-driver ID to fly within the United States, they probably want a New York enhanced license or a REAL ID. Otherwise, they will need to use a valid U.S. passport or another federally approved valid form of identification when they walk up to the TSA document-checking podium. The consequence of not having a valid ID is that an individual won’t be permitted to board their flight.

REAL ID is a “coordinated effort by the federal government to improve the reliability and accuracy of driver licenses and identification cards,” said Robert Duffy, TSA’s Federal Security Director for LaGuardia, Westchester, Long Island/MacArthur, and Stewart Airports in the New York City area. “The improvements are intended to inhibit terrorists’ ability to evade detection by using fraudulent identification.”

New Yorkers have three options from the state’s Department of Motor Vehicles. They can get an enhanced ID, a REAL ID, or a standard ID. The enhanced ID and REAL ID comply with the REAL ID laws, however, the standard driver’s license is not. The New York Department of Motor Vehicles offers an online tool to help residents determine which ID is right for them. An enhanced ID can be used instead of a passport to return to the U.S. by land or sea from Canada, Mexico, and some countries in the Caribbean, although it is not acceptable for air travel between these countries. However, an enhanced ID is REAL ID-compliant and is accepted to board a domestic flight.

“The good news is that you do not have to wait to get a REAL ID or Enhanced ID,” said Mark J.F. Schroeder, Commissioner of the New York State Department of Motor Vehicles.  “You can get one now at your local DMV office. We urge all New Yorkers who want to travel within the US to act now, and we certainly are doing everything we can so people know about this change and act before the deadline. We don’t want any customers caught by surprise when they go to travel after the deadline.”

To get an enhanced license or a REAL ID-compliant license, individuals must visit a local Department of Motor Vehicles office in person and bring certain documents to prove U.S. citizenship and state residency. Required documents include one proof of identity, one proof of legal presence, two proofs of state residency, one proof of your Social Security number (if you’ve been issued one), and a current driver’s license if someone is applying to exchange one issued by another U.S. state.

Transportation Security Administration officers who staff the ticket document checking station at airports will not allow travelers into the checkpoint without a REAL ID-compliant license or another form of acceptable ID after May 2025 because of the federal law (The REAL ID Act of 2005) that mandates that a REAL ID is needed. Individuals unable to verify their identity will not be permitted to enter the TSA checkpoint and will not be allowed to fly.

Passed by Congress in 2005 following a 9/11 Commission recommendation, the REAL ID Act establishes minimum security standards for state-issued driver’s licenses and identification cards. Security standards include incorporating anti-counterfeiting technology, preventing insider fraud, and using documentary evidence and record checks to ensure a person is who they claim to be.

Since the enactment of the REAL ID Act in 2005, advancements in technology have enabled TSA to make significant improvements in checkpoint screening, particularly in the areas of identity management, on-person screening, accessible property screening, and alarm resolution. Through the deployment of technologies such as Advanced Imaging Technology (AIT), Advanced Technology (AT) X-ray, then Computed Tomography (CT), Bottled Liquids Scanners (BLS), and Credential Authentication Technology (CAT), as well as deployment of Passenger Screening Canines (PSC) and the rollout of TSA PreCheck®, TSA has continually advanced its security capabilities. TSA also increased its vetting capability through Secure Flight, a risk-based passenger prescreening program that enhances security by identifying low and high-risk passengers before they arrive at the airport by matching their names against trusted traveler lists and watch lists. REAL ID requirements will strengthen these improvements further by providing an additional layer of confidence in the traveler’s identity. 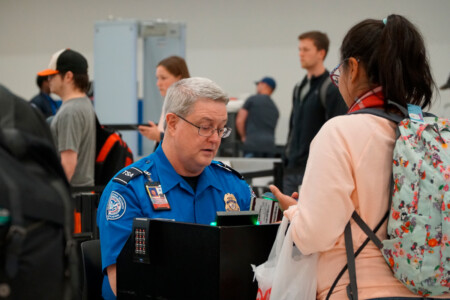